Press enter to begin your search

Inside the Ropes at the Coates Championship Qualifier 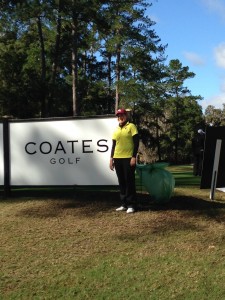 On the first tee!!

What an adventure I have had the last two and a half weeks! While I was playing at The SALLY, where I shot 74-74-74-74 to finish alone in 5th place, I received the most exciting news! I had been awarded the amateur invite into the LPGA qualifier for the first event of the season…. I was beside myself with excitement about this opportunity to play with LPGA professionals and see what the tournament set-up would look like.

When I arrived to practice at the course two days before the qualifier, I was in awe. The ropes were up, the grandstands were set, and there were merchandise and concession tents everywhere. This was it. This is what playing professional golf is. I tried to soak it all in and still maintain my composure and focus.

When I stood on the first tee, I felt out of my element. The women I was playing with were seasoned professionals, they had professional caddies and my rhythm felt off. The officials expected your caddy to ask about lift-clean-and-place and procure a pin sheet. My first few holes showed my nerves. I hit my shots and my putts tentatively, leaving my ball short in the blustery conditions.

Finally, I realized that it was still just golf, even if it was an elevated setting. I relaxed and swung aggressively and suddenly I was out-driving my competitors. I began to have looks at birdie and played my last 13 holes at one over par. A 77 in tough conditions left me T33 out of 84 women.

The best part of this experience for me was being able to see that I have the game to play on the LPGA. I competed against women who have LPGA tour cards and showed that I belong out there! I am now more motivated than ever to fight every day to get better in anticipation of Q School in the fall. Now I can objectively say that I have the game to compete on tour. 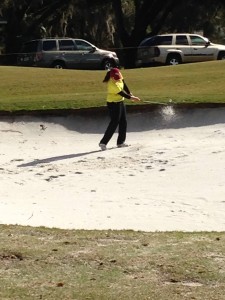 Warming up before the event.