By Alex Milan | British Am | 3 Comments

Wow, what a day! I had a mid-day tee time today and made the best of the wind. I started off the day with a birdie on the first hole and played my first 8 holes at 3-under par. I managed to hit my bump and runs and scramble when I needed to. I really took advantage of my length on the par 5s and just had to make an up and down for one  of the birdies. Another hole, I hit 3 wood and then a wedge for another birdie. I even snuck a 3 iron hybrid in to 6 feet for yet another birdie!

On number 9, I just missed an up and down and took a bogey. I made the turn at two under. The back 9 proved more of a challenge for me. On 10 I ended up running off the edge of the green and made a 10 foot putt for par. Then, on 13 I hit my drive in a nasty pot bunker. I had to come out sideways! Then I hit an 8 iron to 5 feet, and made par! But nothing was coming easy. I three putted 14 for a bogey, and bogeyed again on 15 after yet another pot bunker off the tee. On 16 the par three, another pot bunker and another bogey. I was frustrated.

On the 17th, I ended up deep in the native grass after a tee shot took a nasty bounce. I hit a running 6 iron out to pin high… but in another deep bunker. This time I got it out to 6 feet and made the putt! A par at last. The last par 5 played down wind and I got to pin high easily in two. A nice bump and run up the hill and a putt to finish with a birdie.

Today’s practice went much better! I had an 8am tee time, and the wind blew a different direction today. I played with two very nice girls from Germany and I found that the field looked much more like a golf course today!

I hit bump and runs from 40 yards out in the fairway, navigated far away from the myriad of pot bunkers and avoided most of the tall stuff. I was able to read the greens better today too. The greens are so much slower here than at home, and they barely break at all in most places. I hit the putts firm and straight today and they went in. I made 6 or 7 birdies today and that gives me great confidence for tomorrow. I really felt so comfortable on the links today.

Yesterday I was a bit nervous about the tournament, but after today I feel much better. I saw the birdies and I understand how to negotiate the course now. All that’s left is to play!

After my early round, we went to Dover Castle! It was stunning and a clear day, so we could see the French coastline. the castle was beautiful, but I didn’t stay long. I have to get my sleep for tomorrow!

Finally got out to the course today! Yesterday, the course was only opened for members, so I just practiced at a course down the road. I hit on the range, hit some practice shots out of the fescue and practiced my bump and runs.

My first round at Royal St. Georges was daunting. All I could see before me was hill after hill. No sign of a golf course at all. Standing on the first tee, there was no hint of a fairway to be seen. The first few holes were overwhelming, just trying to determine where to hit to. I was still hitting the ball well and managing to score decently but it felt like everything was moving too quickly. I was trying to take everything in, the ocean, the grass, being at the British Amateur.

The course was a little intimidating today. I played in the afternoon, so the wind was really blowing. I lost more golf balls then I would like to admit, and hit all kinds of shots from everywhere. By the back nine, I had really figured it out though and managed a few birdies on the par 5s. It felt like I played 36 holes today. The course is a par 74, with 6 par 5s! Thankfully, I have another practice round tomorrow! 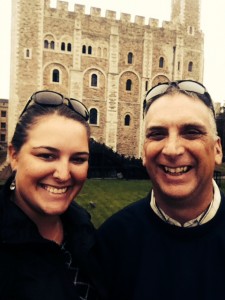 Dad and I on the outer wall with the White Tower behind us.

I have spent the last two days exploring in London, and it feels like I have packed every adventure possible into them. I have explored the nooks and crannies of Westminster Abbey, retraced the steps of Jack the Ripper in the East End late at night, been deep in a bunker in Winston Churchill’s War Rooms, floated down the Thames on a river cruise, felt tiny standing below Big Ben, practiced my wizardry at Platform 9 and 3/4s and so much more!

Two days ago, we went to Westminster Abbey and I am incapable of doing this magnificent building justice. When I stood before the main alter and heard the stories of all the weddings, coronations, and funerals I was covered in goose bumps. It was incredible to stand and see inscriptions written in the 11th century. The history of the Abbey is unique and all the additions each have their own characteristics and details. Outside in the gardens, the inner courtyard was a quiet, peaceful place that people have enjoyed, like I did, for centuries. I was wandering through the stuff of history books. 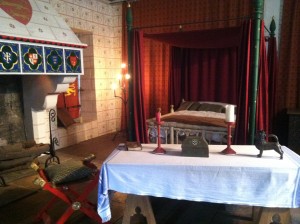 Yesterday we had the opportunity to spend the majority of an afternoon meandering around the Tower of London. As a few of you will know, I have a love of British history and historical novels so that afternoon was magical. We began with a guided tour full of history and stories. I got to walk the same grounds as figures like Anne Boleyn and Henry Tudor. We sat in the chapel and saw the tower green. Next we saw the crown jewels, and the instruments of battle through the ages. We explored every possible tower and even a medieval palace that was contained in the inner wall above Traitor’s Gate. The amount of history that surrounded me was stunning.

After a day on the Thames, exploring the Jewel Tower, the Tower of London and The Tower Bridge, I ate at my first real French Restaurant. I am sure Laure would have been proud of me for all the adventurous food I tried! I sampled some bread and cheeses that I couldn’t pronounce, tried a bite of asparagus soup, ordered duck breast for dinner and had a mint infused tea for dessert. I felt like the meal went on forever, but it was fun to try some new things.

Today we head out to Dover, where I will finally be able to see the course. I am very ready to get out onto the greens and begin to get some preparation in. While exploring London has been fun, I am looking forward to arriving in Dover. Hopefully the weather will stay mild! So far we have not had any rain and it will be in the low 60s on the coast. For now, I am saying farewell to London for the present. 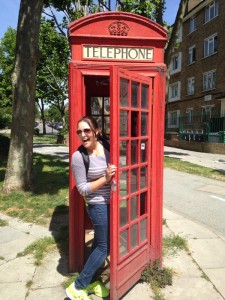 I found a phone booth on our walk!

Yesterday I arrived in London after a 9 hour flight and an hour to get through customs. We then had a two hour car ride to the apartment we are renting for a few days in London. I have to say, the flight over was not the most comfortable. I have a new appreciation for all the long plane rides that my international teammates are subjected to! I barely got any sleep on our red eye, but we arrived at our apartment at 11:30 London time.

We are staying in a great location and decided to walk to the Camden Market and find some lunch, explore and get some groceries. Walking through the streets of London was fun, there is plenty of public transit and so many town homes and apartments, it does not seem similar to any of our big cities in the states- everything is so much older!

The Camden Market was fun, but there were signs everywhere warning of pickpockets! There were so many shops and booths and pubs to explore. We sat and relaxed for a bit next to the Camden Lock and watched a few boats get put through. We were trying to push through all the jet-lag but we were getting very tired. On the way back to the apartment, we stopped at a grocery store and filled our backpacks for the rest of the walk.

After a quick dinner, we all dropped like flies! Some went to bed at 6pm, I kept myself up until 8 and then had a great night sleep. Today, I am off to explore some of the sights here in London, and Friday morning I will drive down to the golf course.

Journey Across the Pond

By Alex Milan | British Am | No Comments
Hello All!
I am so excited to leave today to start my adventure across the pond! All throughout the next few weeks, I will be checking in and updating you on my travels. When I found out I gained entrance into the field for The Ladies British Amateur, I was ecstatic. This will be my first opportunity to play in Europe- and the first time I have ever traveled there. I am lucky enough to have my whole family make the trip with me, my parents, sisters and grandparents. This trip will be an early college graduation present for me!
The biggest struggle in preparation for traveling was figuring out what to pack! I kept jokingly telling my mom that I needed to call Coach Bond and ask her to type me up a packing list! Normally for every tournament, we received a detailed itinerary, complete with tee times, dinner events, outfits to be worn on the course, dress codes for various dinners, and a reminder of any extras we might need for the weather. I was sorely missing my list as I tried to plan for foreign weather. The next obstacle was trying to fit everything I thought I might need into one 50 lbs bag, I managed- but just barely! And now that I am sitting at the airport, I am hoping that I have remembered all the important things.
Our first stop will be a few days in London, and then we will head down to Sandwich, where I will get my first view of the championship venue, Royal St. Georges’! I cant wait to get to the course and start preparing for the tournament.
I will be checking in soon! 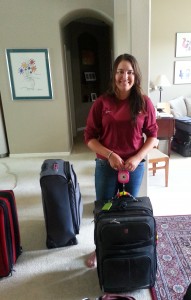